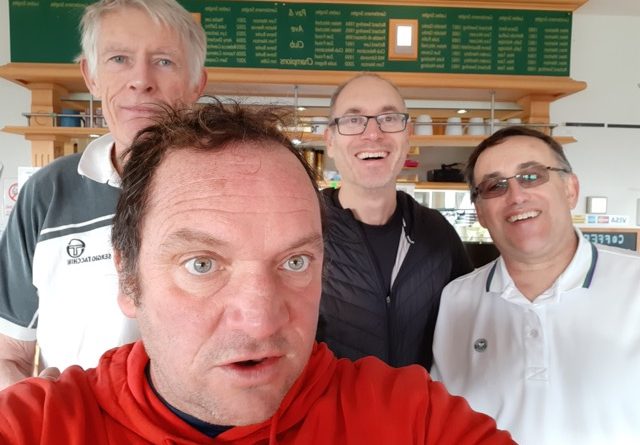 A crisp sunny sunday saw us face Cross in Hand’s 3rd team and our hearts sank slightly when we saw how young they were…our combined age was over 220 and they were probably just the right side of 130. But there was a lot of experience on our side of the net – not all of it good or relevant of course.

So far this season, after 2 matches, we had – after being promoted – maximum points and a 100% sets record but this fell today sadly. We still posted a 3-1 win but dropped 2 sets after a slightly underperforming start from Brian Kreel and Neil Moss (in our own inflated opinion of ourselves) and some tenacious stuff from 2 really nice guys from Cross in Hand. Joel Moss and Steve Davies ground out 2 wins  and then Brian and Neil found their form to win the second rubber 6-3 6-0. Holding serve helped ahem…blame the bloke at the net.
Our  bar staff had decided to prioritise playing an away match over making us some scoff so we had to have a few Co-op pizzas – the equivalent of petrol station flowers – and a nice chat with the opposition over tea. The post match tea is a really nice thing to do even if we compete fiercely on court. You get a nice class of bloke playing tennis – generally…
Thanks to Cross in Hand for being really nice guys and apologies again for the ball in the face Billy – nice match chaps! Pic is l-r Steve Neil Brian and Joel and please do not believe any claims from Joel that I am his Dad…simply untrue and slanderous although we do share the same surname.